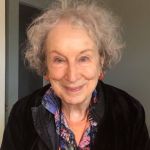 The versatile author, Margaret Atwood is a Canadian poet, novelist, literary critic, essayist, teacher, environmental activist, and inventor who has begun writing plays and poems at the age of 6. Isn't it interesting? Later, she continues her writing and participates in several writing programs which inspired her to more in writing. As a result, she published her first book of poetry in 1961 while in the university which won the E.J. Pratt Medal. Since then, She has published 18 books of poetry, 18 novels, 11 books of non-fiction, nine collections of short fiction, eight children's books, two graphic novels, and several small press editions of both poetry and fiction.

Do you know that her works encompass a variety of themes including gender and identity, religion and myth, the power of language, climate change, and "power politics." She is the inventor of the LongPen device and associated technologies that facilitate remote robotic writing of documents. She was honored with several awards which are listed below. If you are interested to know more about her and her writing career, you should have a scroll through the page below.

What is Margaret Atwood famous for?

When was Margaret Atwood born?

Margaret Atwood was born in 1939 to her parents. Currently, she is aged 82 years old. She was born as the second child of her parents Carl Edmund Atwood and Margaret Dorothy. Her father is an entomologist while her mother is a former dietitian and nutritionist. Similarly, she was born in Ottawa, Ontario, Canada, and later raised in the backwoods of northern Quebec, and traveling back and forth between Ottawa, Sault Ste. Marie and Toronto. Because of her father's profession, the family's constant change of the place of living. She holds Canadian nationality and belongs to the White ethnicity. Her zodiac sign is Scorpio and follows Christianity.

For education, she attended  Leaside High School in Leaside, Toronto at the age of 8 and graduated in 1957. She then enrolled at Victoria College at the University of Toronto and graduated with a Bachelor of Arts in English, French, and philosophy in 1961. After that, she joined Radcliffe College of Harvard University where she obtained a master's degree (MA) in 1962 and pursued doctoral studies for two years, but did not finish her dissertation, The English Metaphysical Romance.

How did Margaret Atwood become an author?

Margaret Atwood holds numerous honorary degrees from various institutions and won some reputed awards during her career which are listed below:

Who is Margaret Atwood married to?

Margaret Atwood was happily married to Jim Polk in 1968. However, the marriage lasted for only five years and eventually got divorced in 1973. She then has a romantic relationship with a novelist, Graeme Gibson. Together, the couple blessed a daughter named Eleanor Jess Atwood Gibson in 1976. Sadly, the couple had a blissful life together until her partner died in 2019. Currently, she lives in Toronto with her daughter.

Margaret Atwood has been engaged in the literature industry since 1961. During her career, she has written and published many novels, poems, and short stories. Thus, she should have earned an impressive amount of money from her writing career to date. Based on some online sites, her current estimated net worth is said to be $30 million. However, her salary and other financial details are yet to be disclosed.

How tall is Margaret Atwood?

Margaret Atwood has a height of 5 feet 7 inches and she weighs around 65 Kg. She has a pair of beautiful greyish-green eyes and her hair color is grey. Further, her other body information is yet to be disclosed. In the case of disclosure, we will let you know.

Trivias About Margaret Atwood You Need To Know.