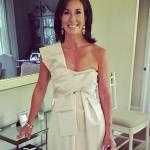 Mary Bubala is an American journalist and news anchor. She was fired from WJZ-TV in May 2019 after she appeared to link ex-Baltimore Mayor Catherine Pugh's resignation to her race and gender. She had worked there for over 15 years before getting fired.

What is Mary Bubala Famous For?

- Fired for racial and sexist comments from WJZ-TV, where she worked for over 15 years.

Where was Mary Bubabla born?

Mary Bubala was born on 14 September 1969. She was born to a father Paul Bubala, and a mother, Carol Bubala. Her birth place is in Chicago, Illinois in the United States. She holds American nationality. She belongs to White ethnicity. Her zodiac sign is Virgo.

She attended Glenbrook South High School in Glenview, Illinois. She was the member of the Glenbrook South Television (GBS-TV) while at high school. After graduating from high school, she relocated to New York, where she attended Ithaca College. She later graduated with a bachelor of science in broadcast journalism from John Hopkins University in 1991.

She had previously worked at WMAR in Maryland, WENY and WBNG in upstate New York, and WOKR in Rochester.

The day after her graduation, she got a job at WENY-TV as a weekday news anchor and weekend reporter.

She was awarded a regional Emmy for outstanding news anchor and was nominated for one for her coverage of the Freddy Gray protests.

She was honored by the Maryland Daily Record as an Influential Marylander in 2018.

She joined WJZ-TV in December 2003. She worked there for over 15 years before getting fired in May 2019.

She was fired from WJZ-TV in May 2019 after she linked ex-Baltimore Mayor Catherine Pugh's resignation to her race and gender.

Bubala said while speaking with Loyola University Maryland professor Karsonya "Kaye" Wise Whitehead, "We've had three female, African-American mayors in a row. They were all passionate public servants. Two resigned, though. Is this a signal that a different kind of leadership is needed to move Baltimore City forward?".

For her comments, the Baltimore Association of Black Journalists (BABJ) issued a statement objecting Bubala's comments. They claimed Bubala's remarks were racial and sexist.

Who is Mary Bubala Married to?

Mary Bubala is a married woman. She is married to Bruce Douglas Smith. Smith is an oncologist. The couple met in Rochester, New York. They tied a knot to each other in September 1996. The couple has two children together, Nate and Matt.

What are Mary Bubala Body Measurements?

Mary Bubala has an average height. She has a slim body build. Her body measurements are currently unavailable.

She has light brown eyes and her hair color is dark brown.

What is Mary Bubala Net Worth?

Mary Bubala has spent her career working in television as a journalist and news anchor. It can be assumed that she is paid well for her duty in her work. However, information about her salary is not available. Her net worth will be updated soon.

Trivias About Mary Bubala You Need To Know.