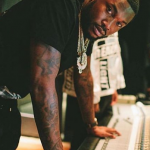 Robert Rihmeek Williams known professionally as Meek Mill is an American rapper and activist. Raised in Philadelphia, he embarked on his music career as a battle rapper and later formed a short-lived rap group, The Bloodhoundz.

Furthermore, Mill also became part of another controversy after the release of his single ‘Amen’ which according to many disrespected Christianity. Apart from his civil suits, Mill has also had feuds with numerous rappers and singers over the years. He has an ongoing feud with fellow Philadelphia-born rapper Cassidy, Toronto-based entertainer Drake, The Game, Philadelphia-based rapper Beanie Sigel, and Kendrick Lamar among others. There is a rumor going on which suggests that Mill and Nipsey Hussle are working on a collabo Album.

Meek Mill was born as Robert Rihmeek Williams in South Philadelphia, Philadelphia, Pennsylvania with a Taurus birth sign. He is the son of Kathy Williams. He has an older sister, Nasheema Williams. His father was killed when he was just five years old. He had a rough childhood growing up as their financial condition was poor.

Additionally, he became interested in the world of music and more particularly rap since his childhood years. He is of American nationality. Furthermore, he belongs to the African-American ethnic background.

Meek Mill initially took part in rap battles, under the pseudonym Meek Millz. He also formed the rap group, The Bloodhoundz along with his other three friends. Additionally, the rap group released four mixtapes. In addition, he released his fourth solo mixtape, ‘Flamers 2: Hottest in the City’ in 2008. After being impressed by Mill’s work, Charlie Mack, founder and President of 215 Aphillyated Records signed him to his management company. Later, he chose Atlanta-based rapper and record executive T.I.’s label.

Since then, He has released albums including ‘Dreams and Nightmares’, ‘Dreams Worth More Than Money’, and ‘Wins & Losses’. In addition, he announced the launch of his own record label imprint, Dream Chasers Records on October 26, 2012. He also has 11 credits as an actor and has appeared in the TV series ‘Single Ladies’, movie ‘Streets’ and several other music videos. In addition, he also has 8 credits for soundtracks.

In addition, He garnered the BET Award nomination in 2015 for the song ‘Dumb’. He shared the award with Jazmine Sullivan.

Awards and Achievements of Meek Mill

Net Worth and Social Engagement of Meek Mill

Meek Mill has not revealed his current salary. However, he has an estimated net worth of around $ 14 million at present. He has been very successful in his career and this has given him great earnings and wonderful net worth. His incredible net worth proves how successful he has been in his career.

Similarly, He dated fashion designer Jai Nice for 4 months from September 2013 to January 2014. He also had a fling with glamour model Lesha Marie in 2014. Furthermore, He dated popular rapper and songwriter Nicki Minaj for two years. They were together from early 2015 to December 2016. At present, he is believed to be single.

Talking about his body measurement, Meek Mill has a height of 6 feet 2 inches. Additionally, he weighs around 94 kg. His hair color is black. Furthermore, his eye color is dark brown. However, his body specifications like chest, waist, and hips measurements are 40-36-37 inches. He wears 6 (US) shoe size and his bicep size is 13 inches.

Trivias About Meek Mill You Need To Know.