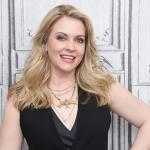 Some kids are born talented and that's exactly the impression Hollywood had on Melissa Joan Hart who is widely known for her role in Clarissa Explains It All and Sabrina the Teenage Witch, after she excellently advertised a bathtub called Splash at a tender age of four. That single stint paved the way for her to countless commercials. Also, her contagious smile on ads allured the interest of world-class movie writers, producers, and directors. Let's know more about the talented actress through this article.

Who are the parents of Melissa Joan Hart?

Recalling her early life, Melissa was born in Smithtown, New York, USA. Her father William Hart was a carpenter and an entrepreneur, and her mother Paula Hart was a talent manager. She is the eldest of five siblings. All her siblings are in the acting profession. Her parents divorced when she was a teenager. Along with her siblings and mother, she then moved to New York City. Her mother got married for a second time, to Leslie Gilliams.

How Melissa Joan Hart became a part of the entertainment industry?

Who is Melissa Joan Hart married to?

Reflecting on her personal life, Melissa was married to musician Mark Wilkerson. They wed on July 19, 2003, in Italy. The couple proud to be parents of three children; Mason, Braydon, and Tucker. Their marriage goes 16 years almost and they seem to be happy together. As of now, they live a blissful life without rumors of separation or divorce.

What is Melissa Joan Hart's net worth?

As an actress and singer, Melissa earns a decent amount of money and name in the field of the entertainment industry. As per online sites, her estimated net worth said to be $14 million as of 2019. However, her salary is yet to be disclosed.

How tall is Melisa Joan Hart?

Trivias About Melissa Joan Hart You Need To Know.