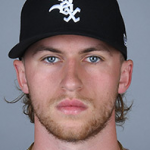 Michael Talbert Kopech famed as Michael Kopech is a professional baseball pitcher who is currently playing for Chicago White Sox as a pitcher. Moreover, he has also played for the Boston Red Sox. He bats and throws right-handed.

Happy Engagement Day to Vanessa Morgan and Michael Kopech. The Riverdale actress is engaged to the baseball player, she revealed Wednesday, July 3. Morgan took to Instagram to post a romantic photo from the swoon-worthy proposal, which took place in front of a roaring, tropical waterfall. “My Forever,” she expressed. Lili Reinhart added, “!!!!!!! So so happy for you!!!” Meanwhile, Madelaine Petsch had a heartfelt message for her pal. “Omggggg dying for this post bestie’s getting married !!!!!!!” she exclaimed on social media. “I’m beyond happy for you my little babies.” The couple started dating a year ago. Previously, Kopech; a pitcher for the Chicago White Sox; dated Brielle Biermann, daughter of Kim Zolciak-Biermann of the Real Housewives of Atlanta.

How old is Michael Kopech?

Michael Kopech celebrated his 23rd birthday as of 2019.

Michael Kopech was born as the son of Michael P. Kopech and Tabbetha Kopech, on April 30, 1996, in Mount Pleasent, Texas, the United States. His full name is Michael Talbert Kopech. His zodiac sign is Taurus. He holds American nationality and belongs to white ethnicity. He was brought up by his parents together with his sister Kyasi Kopech. He was interested in playing baseball from an early age. As per his education, he attended Mount Pleasant High School and then the University of Arizona.

Michael Kopech is a very handsome baseball player with a charming smile. He stands at a height of 6 ft. 3 inches and weighs 93 kg.

Worth, Salary of Michael Kopech

As of 2019, the exact figures of Michael's net worth has not been disclosed yet but is expected to be in a seven-digit figure.  He received a signing bonus of $1,600,000 after he signed a contract with Red Sox. He owns a Hammar car which is worth more than $50,000.

Regarding Michael Kopech personal life, he is recently engaged with Canadian actress and model, Vanessa Morgan. Previously, he dated Brielle Biermann, an American-Italian socialite. As of today, the couple is living a happy life without any disturbances.