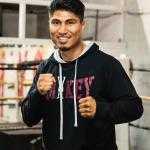 Miguel Angel Garcia Cortez, professionally known as Mikey Garcia is an American professional boxer. He is known as a boxer-puncher with strong fundamentals, formidable punching power, and adaptability. Trained by his father, Eduardo, and his former world champion brother, Robert Garcia, he has held multiple world championships in four weight classes. The Ring, the Transnational Boxing Rankings Board, the Boxing Writers Association of America, and ESPN have ranked him as the world's fifth best active boxer as of May 2018. He has recorded 30 professional wins by knockout and 9 professional wins by decision.

Errol Spence Jr. defended his welterweight championship defeating Mikey Garcia at the AT&T Stadium in Arlington, Texas on 16 March 2019. The event was exclusive on FOX PPV. Errol Spence defeated Garcia via unanimous decision with 120-107, 120-108, and 120-108.

Earlier, the 31-years old Garcia stated his desire to fight welterweight champion Errol in 2018. The 29-years old Errol admitted that the fight was too big to turn down and would not be hard to make.

Mikey Garcia was born on 15 December 1987. He was born to Mexican parents. His father, Eduardo was an amateur boxer and trainer. His birth place is in Oxnard, California, in the United States. He holds American nationality. His zodiac sign is Sagittarius. He has two older brothers, Daniel Garica, and Robert Garcia. He grew up in Oxnard, California. He has said that he grew up in a "gang-related neighborhood" in Oxnard, California. He attended and graduated from Pacifica High School in 2006. He graduated from the Ventura County Police Academy but he did not serve as a police officer rather he chose the ring.

He started his amateur career at the age of 14. He has won following championships.

Mikey turned pro in 2006. He signed with Top Rank.

He was undefeated in his first 20 professional fights.

He defeated the veteran Tomas Villa by T.K.O in the first round to win the USBA Featherweight Championship in May 2010.

He won his first world title to become a Featherweight Champion after defeating WBO Featherweight champion and Ring No. 1 ranked featherweight, Orlando Salido in January 2013.

He earned a career-high $220,000 purse after defeating Orlando Salido.

Garcia was set to make his first title defense against Juan Manuel Lopez in June 2013. But he failed to make 126 lb weight limit. He was stripped of the title and paid $150,000 penalty to Lopez.

He later defeated Lopez to retain his title.

He faced junior lightweight champion Roman Martinez in November 2013, where he defeated Martinez to become a two-weight world champion.

The contract dispute with Top Rank

Garcia sued Top Rank in April 2014 unhappy over his purses. He vacated his WBO title and told that he would return to the ring under a new contract with Top Rank. The main reason was he had difficulties in making the 130-pound limit. Later, Top Rank and Garcia reached an agreement. He remained out of the ring for 2 and a half years.

Two and a half years later, Garcia returned to the ring to fight against former world featherweight titleholder, Elio Rojas in July 2016. He defeated Rojas in the 5th round via knockout.

He faced undefeated WBC champion, Dejan Zlaticanin in January 2017. He defeated Dejan via knockout in the third round to become a three-weight world champion. Dejan faced his first professional defeat against Garcia.

He defeated Broner via unanimous decision with both fighters earning $1 million each. The fight was the most watched fight on Showtime since Deontay Wilder's win over Bermane Stiverne in January 2015.

He called out four-weight world champion Miguel Cotto via social media in early September 2017. However, the fight was not scheduled.

He was scheduled to fight new IBF light welterweight champion Sergey Lipinets in February 2017. However, the fight was postponed after Lipinets suffered a hand injury while training.

The fight was rescheduled to take place in March 2017, where Garcia defeated Lipiniets after 12 rounds via unanimous decision to become a four-weight world champion.

With the win, he also became the linear light welterweight champion joining Manny Pacquiao and Juan Manuel Marquez as the only fighter in history to win titles at 126, 130, 135, and 140 pounds.

He vacated the IBF title in April 2018 to defend his WBC lightweight title against IBF beltholder Robert Easter Jr.

The fight took place in July 2018, where Garcia defeated Easter via unanimous decision to become the unified WBC and IBF lightweight champion.

He earned around $1 million purses from the fight.

IBF ordered Garcia in July 2018 to defend his newly-won title against Richard Commey.

Garcia vacated his IBF lightweight title and the purse bid for the potential Commey fight was canceled in October 2018.

It was later announced that the Garcia-Spence fight would take place at the welterweight limit at the AT&T Stadium in Arlington, Texas on 16 March 2019.

Who is Mikey Garcia married to?

Mikey Garcia is a married man. He is married to Fatima Garcia. The two met long-time ago while they were students at the Pacifica High School. The couple has three children together, two boys, and a girl.

What are Mikey Garcia's Body Measurements?

What is Mikey Garcia's Net Worth?

Mikey Garcia earns from his contract with his promoter. He also earns from his fights. He also has sponsorship deals. In conclusion, fighting is his main source of income until his retirement. As of 2019, his net worth is not available.

- His father was an amateur boxer and trainer of world champion boxer Fernando Vargas.

- His brother, Robert, is a former world champion, whereas his brother, Daniel, was a boxer and trainer.

- He, along with Bernard Hopkins and a few other athletes, attended a summit at the Lou Ruvo Center for Brain Health at the United States Capitol.