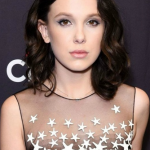 Millie Bobby Brown was born on 19 February 2004 at Marbella, Andalusia, Spain. She was born to Kelly and Robert Brown. She was the fourth child of her parents. She was born with partial hearing in one ear, gradually losing all hearing in that ear over several years.

She went to Pokesdown Community Primary School in England. She has attended weekend stage school in Orlando.

In October 2017, started dating singer Jacob Sartorius. In April 2018, there were some cheating rumors that Jacob had cheated on her with some other girls. But, it didn’t affect their relationship. And they are still together.

Drake and Brown have a strange relationship. As they met in November 2017, at the backstage of the concert in Australia. They had posted the ‘Stanger Things’ poses together and on Instagram. Their friendship has been good for 12 months. They text each other on regular basis. She says that she loves him and he is a great friend and role model to her.

Brown’s net worth is around $3 million.

Brown’s height is 1.62 m and her weight is 47 kg. Her hair color is dark brown and the eye color is hazel. Overall, she has a balanced and healthy body.

Trivias About Millie Bobby Brown You Need To Know.