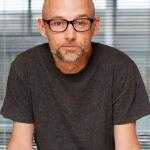 Richard Melville Hall, popularly known by the stage name Moby is an American musician, singer, songwriter, producer, animal rights activist, and author. As a singer, he has sold over 20 million records worldwide. AllMusic considers him to be "one of the most important dance music figures of the early 1990s, helping the music to a mainstream audience both in the United Kingdom and in America".

What is Moby Famous For?

Where was Moby Born?

Moby was born on 11 September 1965. His birth name is Richard Melville Hall. He was born to a father, James Frederick Hall, and a mother, Elizabeth McBride. His birth place is in Harlem, New York City in the United States. He holds American nationality. Three days after his birth, his father gave him the nickname Moby. He has a half brother.

He took guitar and piano lessons at the age of nine. He also studied jazz, music theory, and percussion.

His first job was a caddy at a golf course.

In his early career, he played in several underground punk rock bands through the 1980s.

He attended Darien High School, where he graduated in 1983. He then studied philosophy degree at the University of Connecticut in Storrs, Connecticut. He then turned into electronic dance music. He started working as DJ in local clubs and bars. He then transferred to the State University of New York at Purchase, where he studied philosophy and photography. However, he dropped out of the university in April 1984 to pursue DJ'ing and music career.

He continued performing as a DJ at several clubs and bars. He signed a record deal as the sole artists with Instinct Records by mid-1990.

He has sold over 20 million records worldwide.

He was one of the first musicians to have an episode on Netflix's new music documentary series titled, "Once In a Lifetime Sessions". He records, discusses, and performs his music on the documentary.

He launched a series of co-owned business ventures starting in around 2001.

He later launched TeaNY, a small raw and vegan restaurant and tea shop in New York City in 2002.

He opened a Vegan restaurant Little Pine in the Silver Lake neighborhood of Los Angeles, California in 2015.

He developed an interest in photography at the age of 10. At the time, his photographer uncle gave him a Nikon F camera. He cites Edward Steichen as a major early influence.

He kept his work on public display at the Clic Gallery and the Brooklyn Museum in New York City in 2010.

He released a photography book named Destroyed in 2010.

He showcased his collection of photographs at the Fremin Gallery in December 2014.

Moby and animal activist Miyun park released a book, Gristle: From Factory Farms to Food Safety (Thinking Twice About the Meat We Eat) in March 2010.

His memoir about his life and career, Porcelain: A Memoir was released in May 2016.

His second memoir, Then It Fell Apart was released in May 2019.

Who is Moby Married To?

Moby describes himself as heterosexual and cisgender. Personal information about him is currently unavailable. He has been on several relationships. He has no children. He claimed in a book that he had a brief relationship with actress Natalie Portman. However, Portman denied their affair.

He lived in New York City for 21 years. He then relocated to a castle in the Hollywood Hills area of Los Angeles in 2010. He also owns an apartment in Little Italy, Manhattan.

What is Moby Net Worth?

Moby earns from his music career. He has sold over 20 million records worldwide to date. Besides music, he also earns as an author. He has also investments in several business ventures. As of 2019, his net worth is estimated at $32 million.