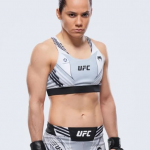 Piera Rodriguez is a Venezuelan MMA fighter who currently competes in the UFC strawweight category. The UFC fighter has played eight professional fights and has won all those matches with 0 losses, and 0 draws to date. Moreover, out of the eight games, she won five by knockouts and 3 by decision. She is a former LFA World Champion. She is nicknamed 'the beast'.

What is Piera Rodriguez Famous For?

What is Piera Rodriguez Birth Name?

Born on November 11, 1992, Piera Rodriguez's present age is 29 as of 2021. Her birth name is Pierangela Rodriguez Giunta. She is from Maracaibo, Venezuela. She holds Venezuealean nationality and her ethnicity is Venezuealean-White. She grew up in Ciudad Ojeda as her family moved there when she was little; she moved back to Maracaibo to study psychology at Rafael Urdaneta University. She has a loving and supportive family, and she occasionally makes posts of them on her Instagram. She has an older brother named Gian Franco Rodríguez, an actor known for appearing in This Is How I Lost My Virginity, Halston, Simón, and many more.

Who is Piera Rodriguez Boyfriend?

Piera Rodriguez is not married yet and she is currently single. She does not have a boyfriend as she has not yet introduced the love of her life to the media. She has not taken a moment to share the information about her love affairs with her admirers and kept her relationship status a secret. Her sexual orientation is straight. She seems to be more focused on her career at present.

What is Piera Rodriguez's Net Worth?

As of 2022, the net worth of Piera Rodriguez is estimated to have in the range of $500K-$1 Million. Her main source of wealth comes from her fighting career. She has not revealed how much she makes from her profession, but she might receive a decent paycheck for fighting with her life at stake. She is living a cool lifestyle from her career earnings.

How tall is Piera Rodriguez?

Piera Rodriguez is a beautiful lady with a standing height of 1.60m ( 5′3 ″). Her body weight consists of 52 Kg or 114 lbs. Her body type is athletic. Her other body size is still to get disclosed yet. Her hair color is red-brown whereas her eye color is brown. She has also inked tattoos on her arms.

Trivias About Piera Rodriguez You Need To Know.