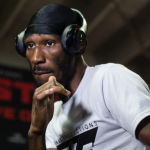 One of the American professional boxer is Robert Easter Jr. From 2016 to 2018 he held the IBF lightweight title.

Easter’s height is 5 feet 11 inch and weight is 62 kg. He has black color hair and black color eyes. He has the balanced and healthy body.

Easter net worth is under estimation.