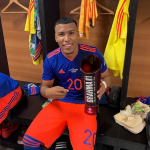 Roger Martinez is a Colombian professional football player who currently plays for the Mexican Liga MX side Club America. Before joining Club America, he has played for teams like Racing, Ramon Santamarina and Villarreal. Martinez has been playing football since a young age and has played for the youth team of Juventus and Expreso Rojo. Today, let's explore the facts related to the Roger Martinez wiki, career, affairs and net worth.

Roger Martinez scored an outstanding goal as Colombia beat Argentina 2-0 in a Copa America Group B opener in Salvador on Saturday that burst into life after a sluggish start. Just as Colombia looked like being overwhelmed by a dangerous-looking Argentina side, substitute Martinez controlled a cross-field ball on the left wing before cutting across the area and smashing it into the far top corner.

The stunning strike came in the 71st minute and Martinez’s fellow substitute Duvan Zapata made sure Colombia took all the points by pouncing from close range to knock in a cross from Jefferson Lerma 15 minutes later. Colombia had looked stronger in the first half but Argentina was a different beast when Rodrigo de Paul replaced Angel di Maria immediately after the interval and captain Lionel Messi was able to find space to cause some problems.

Messi wasted the best chance of the game before Martinez’s piledriver broke the deadlock when he skewed a rebound wide from close range, and the Barcelona forward also went on a thrilling solo run into the area but could not get a shot away. A mass brawl ensued when Messi was cut down by Colombia’s Juan Cuadrado in the second half while Argentina midfielder Leandro Paredes fizzed two shots at goal.

A goal from Lionel Scaloni’s side looked imminent but Colombia’s usual talisman James Rodriguez split their defense with an impressive long pass to Martinez, who came on early in the game after Luis Muriel was forced off injured. Martinez’s stunning strike floored Argentina and although they came back with a couple more attempts, they never looked like scoring. Colombia top Group B with three points ahead of Qatar’s meeting with Paraguay on Sunday.

Who are the parents of Roger Martinez?

Back to his early life, Roger Martinez was born as Roger Beyker Martinez Tobinson in Cartagena, Colombia. His parents are Marinella Tobinson and Roger Martinez Mercado. He started playing with the youth team of Juventus and Expreso Rojo.

At the age of 17, he was offered to play for Boca Juniors and Argentinos Juniors. He went to Argentina to play with the teams but since his parents weren't there with him, he was unable to play in official matches.

The information regarding his education is yet to be disclosed. In the case of disclosed, we will let you know.

When did Roger Martinez pursue his football career?

Does Roger Martinez have a girlfriend?

Reflecting his personal life, Roger Martinez's love life is a mystery as Martinez has never opened up about his relationships. On his Instagram account, he has posted a picture of a child and what looks to be his partner on December 25 of last year.

The picture suggests that he is already in a relationship and has a child of his own, but there is not any other information aside from it. It is not known whether the girl is his wife or girlfriend.

How much net worth is Roger Martinez owns?

Roger Martinez's net worth is over $2 million. Currently, he is signed to the Liga MX where his weekly wage is reported €42,000 which is €2.1 million per annum. His transfer value is rumored to be around $5.84 million.

How tall is Roger Martinez?

Observing his body statistics, Roger stands a height of 5 feet 11 inches and his weight is unknown. He has an athletic body build. His other body information is yet to be disclosed. In the case of disclosed, we will let you know.