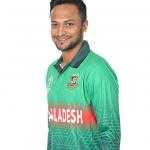 Shakib Al Hasan is a Bangladeshi international cricketer. He is considered one of the greatest all-rounders in the world. He is a left-handed batsman and slow left-arm orthodox bowler. He became the first and only cricketer in history to be ranked the 'No. 1 all-rounder' by ICC in all three formats in 2015. He holds the record for being ranked first as an all-rounder for 10 years. He is still in the highest current rankings in all three formats of the game. He captains the Bangladesh national team in Test and T20I formats. He has posted several records and won several awards in his professional career.

What is Shakib Al Hasan famous for?

- Considered one of the greatest all-rounders in the world. 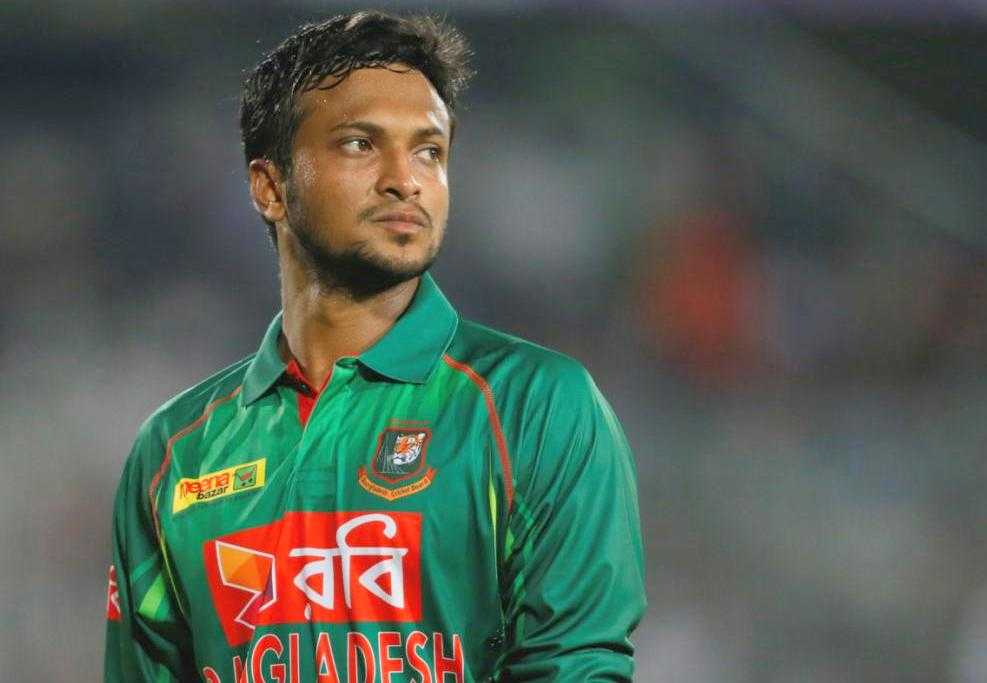 Where was Shakib Al Hasan Born?

Shakib Al Hasan was born on 24 March 1987. His birth place is in Magura, Khulna in Bangladesh. He holds Bangladeshi nationality. Information about his parents, siblings are currently unavailable.

He started playing cricket at an early age. His performance at local tournaments earned him a place at the Islampur Para Club. He then trained at a government-run sports institute, Bangladesh Krira Shiksha Pratisthan.

He studied BA in English at American International University-Bangladesh (AIUB).

He was drafted by Khulna of the National Domestic League in 2004.

He has represented several cricket teams in Bangladesh Premier League.

He has also played in different domestic leagues all around the world.

He is the first Bangladeshi player to represent an English county cricket team. He was signed by Worcestershire in England.

He is the first Bangladeshi player to play in the Big Bash League. 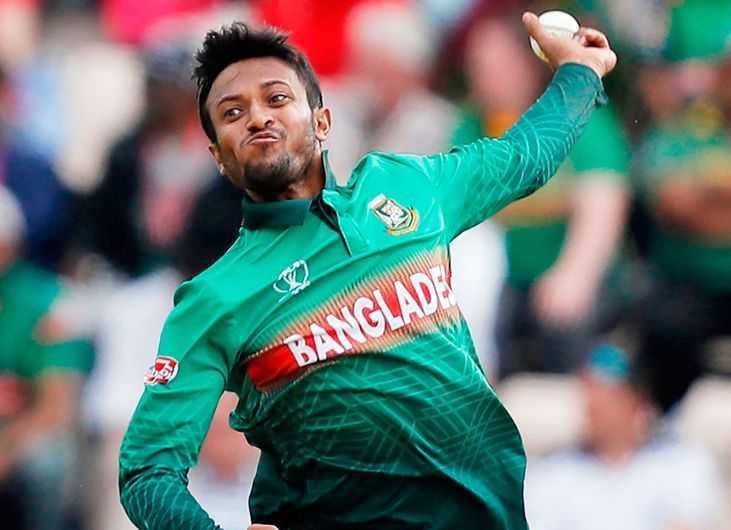 He has been representing the Bangladesh national cricket team since 2006.

He first represented Bangladesh U19 against Zimbabwe.

He made his ODI debut for Bangladesh against Zimbabwe in August 2006.

He made his T20I debut for Bangladesh against Zimbabwe in November 2006.

He made his Test debut for Bangladesh against India in May 2007.

He became the vice-captain of Bangladesh national team in June 2009.

Bangladesh was dismissed for just 58 runs by West Indies at the 2011 ICC Cricket World Cup. The score was a record low for a Full Member at the World Cup.

Bangladesh finished second at the 2012 Asia Cup, where they were defeated by Pakistan by 2 runs in the final.

He faced 6-months international ban from all forms of cricket in July 2014 for disciplinary issues and attitude problems.

He was appointed vice-captain of Bangladesh national team for the 2019 Cricket World Cup.

He became the first cricketer in the World Cup to score 500 runs and take 10 wickets in a single tournament. He achieved this feat at the 2019 World Cup.

He has won 13 Man of the Series and 28 Man of the Match awards across all formats till June 2019. 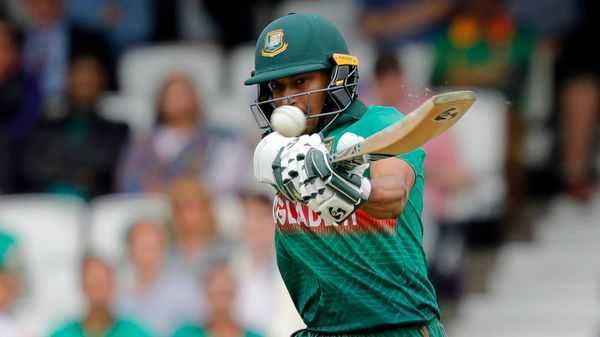 Best partnership record for any wicket for a Bangladeshi pair in ODIs, with Mahmadullah (224). (This is also the highest ever 5th wicket runs stand in the history of ICC Champions Trophy)

Most wickets taken in T20 cricket on a single ground (76 at Shere Bangla National Stadium, Mirpur)

The fourth bowler in Test cricket history to pick up 5-wickets hauls against all Test playing nations (after Dale Steyn, Muttiah Muralitharan, and Rangana Herath)

The third all-rounder in the history of international cricket to reach 10,000 runs and take 500 wickets, fastest to do so

First spin bowler, and third player overall (with Wasim Akram and Waqar Yonis grabbing 100+ each at Sharjah stadium), to grab 100+ ODI wickets at a single ground. (112 at Sher-e-Bangla National Stadium)

In 2017 in the 1st Test between Bangladesh and New Zealand, he became only Seventh batsman to score a double century and got a duck in a test when he scored 217 and 0.

Only The Third all-rounder in the World to score a century and take a 10 Wicket-haul in a match after Sir Ian Botham and Imran Khan.

The only all-rounder in cricket history to be ranked #1 Allrounder In all three formats. 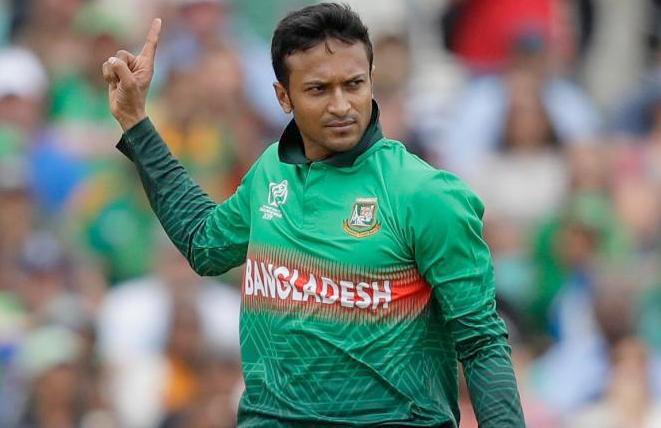 In December 2018 in the 2nd T20I against West Indies, Shakib become the eighth cricketer to take at least one five-wicket-haul in all three formats.

Shakib also holds the record of best bowling figure by a captain (5/20) in a T20I match and the only captain to pick up a five-fer in T20Is.

In the first match of against South Africa in 2019 World Cup, he became become the second Bangladeshi bowler to bag 250 ODI wickets and the fastest and the fifth player to score 5000 runs and to take 250 wickets in ODIs in just 199 matches. (Others cricketer being Abdul Razzak, Sanath Jayasuriya, Jacques Kallis, and Shahid Afridi)

Shakib became first Bangladeshi player to score 1,000 runs in World Cup and also the first from Bangladesh to pick up a five-wicket haul in World Cup.

He became the second cricketer after Yuvraj Singh to score a 50 and pick up a 5 wicket haul in World Cup match.

In 2019 World Cup group match against India, Shakib became first ever cricketer to score 500 runs and pick up 10 wickets in a single tournament of World Cup.

Shakib Al Hasan stands at a height of 1.75 m i.e. 5 feet and 9 inches tall. He has an athletic body build. He has brown eyes and his hair color is black.

Who is Shakib Al Hassan Married to?

Shakib Al Hassan is a married man. He is married to Bangladeshi American Umme Ahmed Shishir. They got married in December 2012. They first met in England in 2011, while Shakib was playing county cricket for Worcestershire in England. They have a daughter, Alaina Hasan Abri, born in 2015.

What is Shakib Al Hasan Net Worth?

Shakib Al Hasan earns from his professional cricket playing career. His income comes from salary, contracts, bonuses, and endorsements. His annual salary is reported at $4.5 million and his net worth is estimated at $36 million.

Trivias About Shakib Al Hasan You Need To Know.