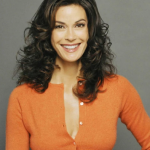 One of the best American actress, voice actress, writer, singer, You Tuber and former cheerleader of National Football League is Teri Lynn Hatcher who is famous as Teri Hatcher. She was the cheerleader of San Francisco 49ers. Due to the television series Lois & Clark she was best known as Lois Lane.

Teri Hatcher was born on 8 December 1964 at Palo Alto, California. Her father name is Owen W. Hatcher who is a nuclear physicist and electrical engineer and mother name is Esther Beshur who is a computer programmer. She was the only child. Her father is of English, Welsh and Irish descent whereas her mother is of half Syrian and half Czech and Irish descent. She was fond of ballet and she took ballet lessons at the San Juan School of Dance in Los Altos. She attended Mango Junior High which is now as Sunnyvale Middle School, Fremont High School and De Anza College. She was sexually abused by her uncle at the age of five.

Teri Hatcher’s height is 1.68 m and weights is around 55 kg. she has hazel color eyes and hair is of dark brown. She has the balanced and healthy body. She also has the sexiest body by which she has been listed in hottest woman list.

In American Conservatory Theater she studied acting. She was the NFL cheerleader in the San Francisco 49ers. She also joined the cast of TV series The Love Boat. She also appeared in the recurring role in Penny Parker from September 1985 to May 1986. She also played as the lead character on Karen’s Song and also made the guest appearance in Star Trek. She also played in Sunday Dinner.

In Lois & Clark she landed the starring role as Lois Lane. She got famous from the role. She also won the role of Paris Carver in the 1997 James Bond film Tomorrow Never Dies. She was also voted as the world sexiest woman. She also played in various movies as Spy Kids, Dead in the Water, 2 Days in the Valley and The Cool Surface. She also made the guest appearance in Seinfeld episode. She appeared in a series of Radio Shack television commercials.

In 1996, Teri Hatcher hosted NBC’s Saturday Night Live beating four other actress. She also won Best Actress in a Musical or Comedy Golden Globe Award in January 2005 and Screen Actor Guild Award for same category in 2005 only. For Emmy award she was nominated for as Outstanding Lead Actress in Comedy Series. She was even the highest paid television actress. In 2006 May she released her first book named as Burn Toast. She even performed the Beatles song. She also appeared in Idol gives back in which she sang the song. In 2010 she made the guest appearance in Small Ville. She was also named in the hottest women list in 2011. She also voiced in Disney Films. Recently she has debuted the YouTube channel calling Hatching Change which includes two segments as “Van Therapy” and “Don’t Eat it”.

In 4 June 1988, Teri Hatcher married Marcus Leithold who was of Butler, Pennsylvania. But they got divorced. She then married Jon Tenney in 27 May 1994 and they do have daughter named as Emerson Rose who was born on 10 November 1997. They again got divorced on March 2003.

Teri Hatcher net worth is estimated to be $50 Million dollar. She is one of the famous American actress.