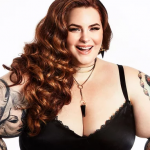 Ryann Maegen Hoven is popularly named as Tess Holiday who is an American plus-size model based in Los Angeles. By profession, she is a model, make-up artist and blogger. She is popular for getting featured in Vogue Italia, H&M’s advertising, and others.

On 5th July 1985, Tess was born in Laurel, Mississippi, United States. Her mother left her father when Holliday was a young child. In June 1995, her mother was paralyzed and disabled after she was shot twice in the head by her fiance, who was charged with attempted murder. Her nationality is American. Her real name is Ryann Maegen Hoven. She left school at the age of 17. Her ethnicity is North American.

Tess is a married woman. She is married to Nick Holliday, Australian Businessman in the year 2015. The couple is blessed with 2 children named Rilee and Bowie.

Net Worth and Salary of Tess

The net worth of Tess Holliday is estimated to have $3 Million and salary is $1.5 Million Per Annum.

Trivias About Tess Holliday You Need To Know.