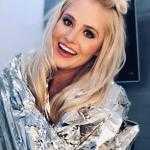 A former television host and political operative, Tomi Lahren is also a brilliant conservating political commentator. Her show Tomi made her recognizable worldwide. She also hosted On Point with Tomi Lahren. She joined Fox News as a contributor in 2017 and is working for an organization that supports Donald Trump.

Tomi Lahren has always been a controversy magnet. After calling out to Barack Obama, taking on Beyoncé, and criticizing Jesse Williams, She is now being scrutinized for her pro-choice opinions.

In May 2018, she was attacked by a woman in a restaurant in Minneapolis. That woman verbally attacked her and threw the drink at her during brunch with her parents and she was dowsed by the drink. She felt humiliated but however, she handled the situation with grace.

Tomi Lahren was born in Rapid City, South Dakota, the U.S.A. with Leo birth sign. She is of German and Norwegian descent. Their origin is Scandinavian. Her mother’s name is Trudy Lahren and father’s name is Kevin Lahren. Her father serves as a maintenance manager and her mother is a bank loan administrator by profession.

Her great-grandfather had migrated to the US from Norway. But her grandfather was an alcoholic and he did suicide after he could not recover himself. She grew up in a military family and was brought up in a strict environment. She is a citizen of America.

For education, she was sent to Central High School to study for her primary level. Later she went to the University of Nevada in Las Vegas where she studied B.A in Broadcast Journalism and Political Science. She got a chance to host the Political Roundtable Show at her University.

Currently, Tomi works for Fox News. She is also working for Great America Alliance that supports Donald Trump. Initially, she interviewed for One America News Network and was selected as a host for her own show OnPoint with Tomi Lahren. She also got attention after commenting on prominent Democrats, saying: “Hillary Clinton, Elizabeth Warren, Joe Biden Old Rich White and if the pantsuit fits… male too.” Tomi was seen in TheBlaze show and was famous for ending his show with final thoughts in which she speaks really fast.

Tomi appeared on the show The Daily Show with Trevor Noah. She also spoke about women’s legal access to abortion and accused pro-life position as a hypocrite in the show The View for which she was immediately suspended because the owner of TheBaze is pro-life. In May 2017, she began working in a part-time communications role for Great America Alliance.

Awards and Achievements of Tomi Lahren

The New York Times illustrated her as “Rising Media Star” and BBC news channel characterized her as “Young Republican Who Is Bigger Than Trump on Facebook”. There is yet to come from her side as she is leading her way on the route of success.

Tomi Lahren is very concerned about publishing his relationship details in media. She is in a relationship. She is having an affair with Kevin Martin. Her relationship status was confirmed via her Snapchat post.

It was once said that Tomi was in a relationship with Chase McNary. The photos of couples were found attending many events and dating outside which were published in social media to which Chase told that is was for a very short period that they were together. Even though many sources have verified that she is in a relationship with her boyfriend Jerad Christan.

Tomi Lahren has the very well maintained body structure of hourglass shape. Her body measurements are 32-25-34 inches and have a height of 5 feet and 5 inches. Her weight is 56 kg. Her eye color is blue and has brown hair color. Similarly, She wears the dress of 4. Her shoe size is 8(US).

According to her wiki, Tomi Lahren has been procuring the huge amount of income as of now. A few sources propose that her month to month salary is around $16,000. This has dependably helped her total assets and currently, at this very moment, it has just reached $500,000. With all of her determination and hard work, her net worth is estimated to be somewhere around 3 million dollars.

Trivias About Tomi Lahren You Need To Know.