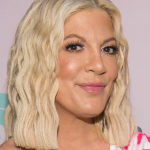 Victoria Davey Spelling famed as Tori Spelling is an American actress, television personality, socialite and author who is most widely known from her first major role, Donna Martin, on Beverly Hills, 90210. She has appeared in a string of made-for-television films, including A Friend to Die For (1994), A Carol Christmas (2003), The Mistle-Tones (2012), both versions of Mother, May I Sleep with Danger? (1996, 2016), The Last Sharknado: It's About Time (2018) and more. She was revealed to be the Unicorn on The Masked Singer on 30th January 2019.

Tori Spelling and Jennie Garth are confident that Beverly Hills, 90210 producer-and Tori’s dad-Aaron Spelling would approve of the quasi-revival, BH90210. “I think he would be super proud. First of all, he’d be really proud that Jennie and I did this, that we went on this journey and it was no easy journey,” Tori said video suite at the TV Critics Association summer press tour on Wednesday, August 7. “It took us two years to get this whole thing put together. But I think he would get it. I feel really confident that we have created something groundbreaking and that’s what he loved to do and he loved storytelling and entertaining and that’s what we do.” Garth added that the legendary TV icon would be “very proud” of his daughter. Tori and Garth starred as Donna Martin and Kelly Taylor, respectively, on the ‘90s drama, which was produced by Spelling Television, for ten seasons from 1990 to 2000. Six years after the show wrapped, Aaron died from complications of a stroke at the age of 83. Earlier this year, the two women recruited former castmates Jason Priestley, Brian Austin Green, Ian Ziering, Gabrielle Carteris and Shannen Doherty to star in BH9010, which premiered on Wednesday. In the new series, the actors play heightened versions of themselves reuniting to film a reboot of Beverly Hills, 90210.

Tori Spelling was born on 16th May 1973 at Los Angelos, California, the U.S.A as Victoria Davey Spelling. Her middle name comes from her grandfather. She started taking acting lessons from an acting coach from her early age of six. Her father name is Aaron Spelling and he was a television, film producer and her mother name is Candy. They were both Jewish. She is an American Citizen with English Ethnicity. She was a Jewish and her parents had immigrated from Russia and Poland but she saw her parents celebrating both Christmas and Hanukkah. As of 2019, she celebrated her 46th birthday. Her early nurture was from Beverly Hills High School in California and she graduated from Harvard-Westlake School in 1990. She has a younger brother, Randy, a former actor who as of 2009 works as a life coach.

Tori Spelling has given many bold pictures while modeling. Her bikini shoots are available in the various website. She is recognized for having a slender and sexy body. She has a tall height of 1.67 m with a balanced body weight of 54 Kg. Overall, she has got a healthy body. Her bra size is 34C and her hair color is Blonde. Her eye color is Dark Brown.

Net Worth of Tori Spelling

The net worth of Tori Spelling is estimated to have $500 Thousand as of 2019 but there is no proper revelation about her salary and income. There is no doubt that she is satisfied with her earnings. Her major source of earning is from her acting career.