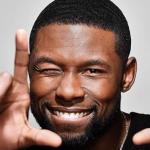 Trevante Rhodes is an American actor. He is best known for his role as Chiron in the Academy Award-winning film, Moonlight. The film became his breakthrough role in his acting career. He earned several accolades for his role in the film. He has starred in numerous movies and tv shows in his acting career. He is set to portray legendary boxer Mike Tyson in the Hulu limited series, Mike.

Rhodes was an athlete in his youth. He was an accomplished track and field sprinter who won a gold medal at the Pan American Junior Athletics Championships.

What is Trevante Rhodes Famous For?

Where is Trevante Rhodes From?

Trevante Rhodes was born on 10 February 1990. His full name is Trevante Nemour Rhodes. He was born in Ponchatoula, Louisana in the United States. He holds American nationality and follows Christianity. His parents are Demour Dangelo and Jessi Rhodes. He has a brother named, Giovanni. He belongs to the African-American ethnicity and his horoscope is Aquarius. When he was ten years old, his family moved to Little Elm, Texas. He attended Little Elm High School where he played football. He played as a running back and left cornerback at Elm High. In track and field, he competed as a sprinter specializing in the 100 and 200-meter dash. He finished second over both distances at the 2007 UIL Track and Field Championships as a junior. His senior year was cut short due to an ACL injury. However, he earned an athletic scholarship in track and field at the University of Texas at Austin. He earned four letters in both football and track and field in his high school career. He studied kinesiology in college. He competed for the Texas Longhorns as a sprinter from 2008 to 2012. He won a gold medal in the 4*100 meters relay for the US team at the 2009 Pan American Junior Athletics Championships.

Who is Trevante Rhodes Wife?

Trevante Rhodes is not married but engaged. He is engaged to a woman named Mara Wright. She is a fitness model signed to Wilhelmina Models. However, detailed information about his personal life and relationships is not available.

What is Trevante Rhodes Height?

Trevante Rhodes stands at the height of 1.83 m i.e. 6 feet tall. He has a body weight of around 194 lbs i.e. 88 kg. He has an athletic body build. His eye color is dark brown and his hair color is black.

What is Trevante Rhodes Net Worth?

Trevante Rhodes earns from his career in Hollywood. The majority of his income comes from his acting career. Having started his acting career in the early 2010s, he has starred in numerous movies and tv shows, most notably in the Academy Award-winning film, Moonlight. His role in Moonlight earned him mainstream recognition in the industry. He was featured in Calvin Klein's 2017 Spring underwear campaign along with Moonlight stars Mahershala Ali, Ashton Sanders, and Alex Hibbert. At present, his net worth is estimated at around $2 million.

Trivias About Trevante Rhodes You Need To Know.