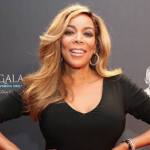 Wendy Joan Williams Hunter famed as Wendy Williams is an American television host, actress, author, fashion designer, and former radio personality who has hosted the nationally syndicated television talk show The Wendy Williams Show since 2008. She has written a New York Times best-selling autobiography and six other books and has created various product lines including a fashion line, a jewelry collection, and a wig line. She is a very talented television host.

What is Wendy Williams Famous For?

Gossips and Rumors about Wendy Williams

Where was Wendy Williams born?

On 18th July 1964, Wendy was born in Asbury Park, New Jersey to Thomas and Shirley Williams, her parents with the birth name Wendy Joan Williams. She was the second of three children. Her siblings' names are Wanda Williams and Thomas Williams Jr. Her nationality is American and her horoscope sign is Cancer. She spent most of her childhood in the Wayside section of Ocean Township. She had sharp characteristics from an early age and had contrast to her older, more bookish sister Wanda. Her ethnicity is African-American. Her religion is Baptist.

Regarding her education, she attended Ocean Township High School and graduated from there. From the year 1982 to 1986, she attended Northeastern University in Boston, Massachusetts. She graduated with a B.A. in communications.

The Career Highlights of Wendy Williams

Who is Wendy Williams married to?

Firstly, she was married to Bertrand "Bert" Girigorie for 1 year. The marriage lasted from 1994 to 1995.

Later, Wendy got married to Kevin Hunter. The couple was dating for 4 years after getting together in the year 1995. The wedding ceremony took place on 30th November 1997. The couple is also blessed with one child named Kevin Hunter Jr. Williams filed for divorce in April 2019 owing to "irreconcilable differences". However, their divorce was finalized in January 2020, she still uses the surname Hunter legally.

Previously, she was also in a relationship with Erick Sermon for a short period of time.

What is Wendy Williams's net worth?

The famous actress, author, and television personality, Wendy has accumulated a net worth of million. Her exact net worth is estimated to have been $20 Million as of now. She is making an attractive net worth from her career. She is also earning a great amount of salary i.e $8,000,000 per season. She is living a luxurious lifestyle from her earnings and she is satisfied with her salary and her net worth.

How tall is Wendy Williams?

Wendy is a very sexy lady with perfect body features. With her charming smile, she attracts a lot of people towards her. She has a tall height of 5 feet 10 inches. She has a very healthy body and a balanced weight of 79 Kg. Her body measurement is 41-30-40 inches. Her dress size is 12 and her shoe size is 11 (US). She has blonde hair and her eye color is brown.

Trivias About Wendy Williams You Need To Know.