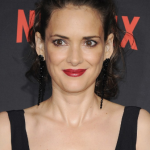 Winona Ryder, one of the most brilliant American actress who has been nominated for two times Academy Award, is the definition of an iconic actress. She is popularly nicknamed as Noni. She has won Golden Globe Award also.

Ryder was born on 29th October 1971, she has always been an A-list celebrity in Hollywood. Her father name is Michael Horowitz and mother name is Cynthia Istas Palmer. She was born in Olmstead County, Minnesota. Her nationality is American and her sun sign is Scorpio. Her ethnicity is White. She belongs to a mixed ethnic background of Ashkenazi Jewish and Belgian. Her full name is Winona Laura Horowitz. Introduced to the world in Tim Burton's 1998 comedy Beetlejuice and in Heathers as a high school outcast, Winona has graced the big screens appearing in distinguished movies like Edward Scissorhands, The Age of Innocence, Reality Bites and Girl, Interrupted among others. There's also her famed relationships with prominent names in the film industry that kept her name afloat in the tabloids.

Moving towards her body features, she stands 1.61 m tall and her balanced weight is 52 Kg. Her eye color is Dark brown and the hair color is Blonde. Her bra size is 32D and dress size is 4 (US). Her body measurement is 36-24-35.

Net Worth of Ryder

Winona has been successful in her professional career as well as in her personal life. Her net worth is estimated to have $18 Million as of 2018. Her salary is still to get unfold.

Winona is also famous for her serious relationships in the 1990s. She and Hollywood star Johnny Depp started dating in 1989 and were engaged in 1990. They broke up after three years following which she started a relationship with Dave Pirner of Soul Asylum in 1993. The couple lasted until 1996. Actor Matt Damon is also known to have dated Winona in 1998. They separated two years later. After that, she had been dated with many celebrities named Rob Lowe, Christian Slater, Robert Downey Jr., Evan Dando, Chris Isaak, Dave Pirner, Daniel Day-Lewis, David Duchovny, Jay Kay, Jimmy Fallon, Beck, Pete Yorn, Conor Oberst, Val Kilmer, Henry Alex Rubin, etc.

Currently, she is in a relationship with fashion designer Scott Mackinlay Hahn.

Trivias About Winona Ryder You Need To Know.