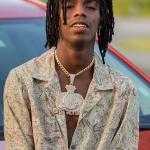 Jamell Maurice Demons, popularly known as YNW Melly is an American rapper, singer, and songwriter. He started his musical career in 2014. Some of his hit singles are "4 Real", "Murder on My Mind", and "Mixed Personalities". He was arrested and charged with two counts of first-degree murder in February 2019.

Jamell Maurice Demons aka YNW Melly was arrested on 13 February and charged with two counts of first-degree murder of two of his close friends, Anthony "YNW Sakchaser" Williams, 21, and Christopher "YNW Juvy" Thomas Jr., 19. The young aspiring rapper, Melly is accused of conspiring with fellow YNW rapper, Cortlen Henry (also known as YNW Bortlen) to stage the double murder of Williams and Thomas Jr. earlier in October 2018. Two alleged rappers staged the double murder and made it appear as if they were fatally injured in a drive-by shooting and drove the victims to the hospital where they later succumbed to their wounds.

The Floridan rapper has been arrested several times earlier for the possession of marijuana and possession of a weapon on ammunition.

YNW Melly was born on 1 May 1999. His birthname is Jamell Maurice Demons. He belongs to African-American ethnicity. Information regarding his parents is currently unavailable. His birthplace is Gifford, Florida, in the United States. He holds American nationality. His zodiac sign is Taurus. He follows Christianity religion. Regarding his education, he is a high school graduate.

Melly started posting his songs on SoundCloud in 2014. He was 15 years old then.

He was imprisoned in 2017 on weapon charges. He was involved in shooting at the age of 16.

In late 2017, while still incarcerated, he released his first project, an EP, Collect Call. His EP featured numerous well-known artists including John Wicks and Lil B.

As of January 2019, his music video of single, "4 Real" has garnered over 26 million views on YouTube.

He released his second commercial mixtape, We All Shine on 17 January 2019, while incarcerated. He featured Kanye West and Fredo Bang on the album. The music video of West featuring "Mixed Personalities" was released with the album.

He has amassed over 3.9 million streams on Spotify as of January 2019.

"Murder on My Mind" is his most streamed song.

He has a record deal with 300 Entertainment and YSL Records.

On 30 June 2018, he was arrested in Fort Myers, Florida for possession of marijuana, possession of weapon or ammunition by a convicted felon and drug paraphernalia.

He was later arrested on 3 January 2019 in Fort Myers for possession of marijuana.

He was once again arrested and charged with two counts of first-degree murder on 13 February 2019 in connection with the October 2018 shooting deaths of two men. Those two who was shot to death were described as his close friends. They were aspiring rappers, Anthony "YNW Sakchaser" Williams, 21, and Christopher "YNW Juvy" Thomas Jr., 19.

According to the authorities, Melly conspired with fellow YNW rapper Cortlen Henry (also known as YNW Bortlen) to stage the double murder of Williams and Thomas Jr. Authorities stated that Melly and Henry made it appear as if the two were fatally injured in a drive-by shooting and  drove the victims to the hospital where they later succumbed to their wounds.

The young rapper from Florida is reportedly single. No information regarding his affair has surfaced yet. He has kept his love life secret.

As of 2019, the net worth of aspiring rapper from Florida is estimated at around $150,000. Working in music is his main source of income. He has a lot to achieve in the music industry. However, his involvement in criminal activities has affected his career.

Trivias About YNW Melly You Need To Know.