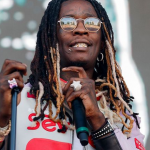 Young Thug is an American Grammy Award-winning singer and rapper. He is known for his contemporary trap music, eccentric vocal shape, and fashion. He is considered to be an influential figure of his generation, with his music impacting the modern sound of hip hop and trap At first, he released a series of independent mixtapes beginning in 2011 with "I Came from Nothing" and then he signed with Gucci Mane's 1017 Records, and later that year he released his label debut mixtape "1017 Thug". He rose to fame in 2014 with the singles "Stoner" and "Danny Glover". On 16th August 2019, he released his debut studio album "So Much Fun" which features guest appearances from artists like Future, Machine Gun Kelly, Gunna, Lil Baby, Lil Uzi Vert, 21 Savage, Quavo, Juice Wrld, Nav, J. Cole, and Travis Scott. The album was nominated for a Billboard Music Award for "Top Rap Album" in 2020 as well as peaked at number #1 on the US Top R&B/Hip-Hop Albums (Billboard) chart and US Billboard 200 chart. It was also certified 'Platinum' by the Recording Industry Association of America (RIAA). On 15th October 2021, he released his second studio album "Punk" which included songs like Recognize Real (with Gunna), Faces, Stupid/Asking, Droppin Jewels, Love You More (with Nate Ruess, Gunna, and Jeff Bhasker), and Hate the Game. The album peaked at number #1 on the US Top R&B/Hip-Hop Albums (Billboard) chart and the US Billboard 200 chart. In the year 2014, he guest appeared on the comedy talk show "The Tonight Show Starring Jimmy Fallon" as himself which is his debut TV show. In 2019, he won the Grammy Award for Song of the Year for his songwriting contribution on "This Is America".

What is Young Thug Famous For?

What is Young Thug Real Name?

Young Thug was born with the real name of Jeffery Lamar Williams on 16th August 1991 in Sylvan Hills, Atlanta, Georgia, the USA. He holds American nationality and he is of mixed ethnicity (African-American). Leo is his zodiac sign and his religion is Christianity. He was born as the 10th child out of 11 children to his parents. He has 10 brothers and sisters. During his childhood, one of Thug's older brothers was shot and killed in front of the family home. In April 2020, during a concert Livestream, Thug revealed a recent brush with death, stating: "I kinda just stayed in the bed and I was like, 'Yo, call the ambulance. I can't move my body, then later, when the ambulance came, I couldn't get out of bed. They had to get me out of the bed, basically. I felt like my whole body was numb and I couldn't move. I went to the hospital and I had found out that I had liver and kidney failure. And I kinda had sorta passed away, like I kinda died." Details about his parents' name is still a mystery. He celebrated his 30th birthday as of 2021. He grew up in Jonesboro South Projects along with other rappers including Waka Flocka, 2 Chainz, and Ludacris.

About his educational qualification, Young has told interviewers that he was expelled in the sixth grade for breaking a teacher's arm. He was sent to juvenile prison for four years. 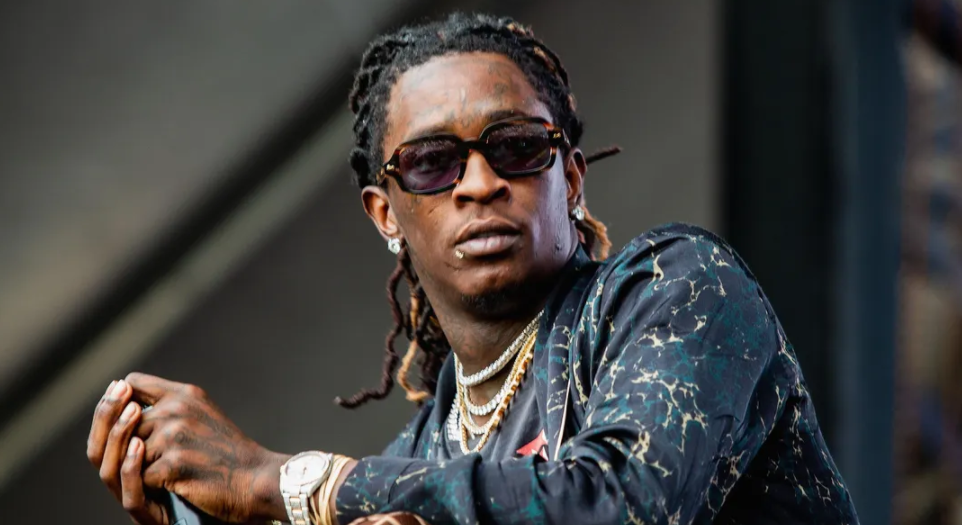 How Rich is Young Thug?

Young Thug is a successful rapper and singer who has made a huge fortune from his work. As of 2022, his estimated net worth is $8 million as per sources. He is making an annual salary of around in the range of $500K - $1 Million from his professional work. His main source of wealth is from the music industry including the sale of his music albums, tours and sponsorship deals. He is living a cool lifestyle from his career earnings. Further, he has made around $1.5 Million via brand advertising. He has appeared in commercials on Hooters, Sprite, Calvin Klein, Puma, etc. About his real estate, he moved into an 11,000 square foot Buckhead house which charges $14K per month. The house has 6 bedrooms, 11 bathrooms with an indoor pool, 4-car garage. Also, he is the owner of cars such as Chevrolet C8 Convertible, Mercedes Maybach, Lamborghini Urus, Rolls Royce Cullinan, and more.

Who is Young Thug Girlfriend?

Young Thug is not married yet but he is an engaged man to his beautiful sweetheart whose name goes by Jerrika Karlae in April 2015. His fiancee, Jerrika is an entrepreneur as well as a designer who manages a swimsuit line. Today, the duo is enjoying their present life happily. His sexual orientation is straight. Young Thug and Jerrika Karlae are planning to get married soon if everything goes alright. 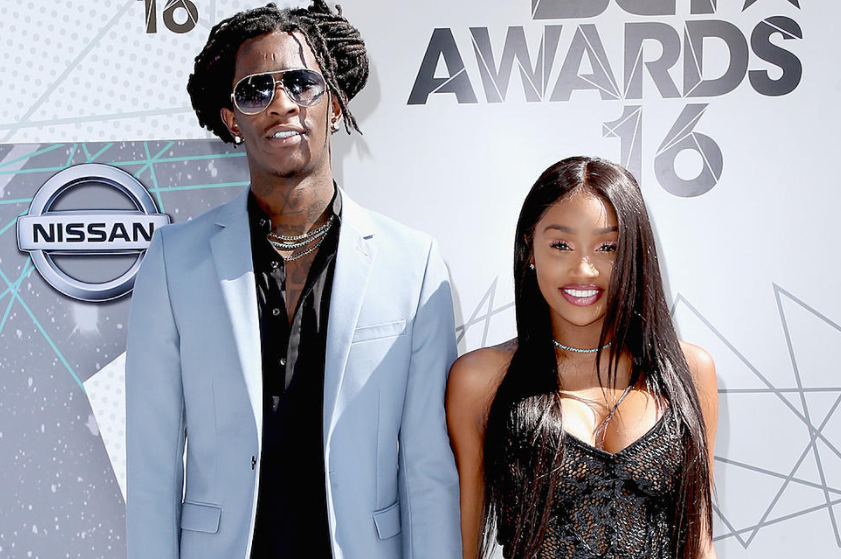 From his previous relationship with four different women, he has six children (3 sons and 3 daughters). He became a father when he was just 17 years old. Back then, he was romantically involved with Amy Luciani.

Regarding his legal issues, he was one of the individuals involved in a lawsuit after the bus driver of the tour bus decided to sue Cash Money Records, Young Money Records, Birdman, and Young Thug. A lawsuit was filed against Thug in January 2017 after Thug didn't show up at a concert in Sahlen's Stadium after a $55,000 contract was signed. He was cleared of battery in April 2017 after reportedly slapping a woman outside a nightclub in March 2016. The woman was arguing with Thug's fiancée, Jerrika Karlae when Thug supposedly stepped in and attacked the woman. The charges were dropped due to a lack of evidence. It was reported in April 2017 that Thug was being sued by Heritage Select Homes for owing almost $2.2 million in house payments. On 24th September 2017, he was arrested in Brookhaven, Georgia on multiple drug possession charges and possession of a firearm. He was then released on bond on 27th September 2017. On 7th September 2018, he was charged with possession and intent to distribute meth, hydrocodone, and marijuana. He's also charged with possession of amphetamine, Alprazolam, codeine (2 counts), and a firearm.

In December 2016, Young Thug joined the #fightpovertyagain campaign. On 29th June 2017, he donated all proceeds of a sold-out concert to Planned Parenthood, stating on Twitter that "I was a teenage parent. Planned+unplanned parenthood is beautiful."

Atlanta police are looking for the man who shot and killed a 31-year-old woman after what they say was a dispute over a bowling ball. LaKevia Jackson, who shared a teenage son with rapper Young Thug, was shot and killed in Atlanta on the evening of March 17. She was 31. According to a preliminary police report, the fatal shooting occurred at the Metro Fun Center and was prompted by a dispute over a bowling ball. CBS 46 reports that Jackson was attending her best friend's birthday party when she got into an argument. Jackson's mother said the suspect waited outside for 20 minutes and then shot her daughter in the parking lot. Police found Jackson dead on the scene when they responded to a report at around 10:50 p.m. "This is truly an atrocity," APD Homicide Commander Lt. Ralph Woolfolk told CBS 46. "A young lady has lost her life over a bowling ball. We talk about conflict resolution time and time again, and this is an escalated dispute so we will work this case through the night and we will find the person responsible. We know who [you] are so go ahead and turn yourself in." Based on surveillance video of the incident, ballistic evidence, and witness testimony, police said they believe they are close to making an arrest. Jackson met Jeffery Lamar Williams before he gained fame as Young Thug. The pair lived in the same apartment complex in Atlanta while she was in high school. Their son is 14 years old. On the night of the shooting, Young Thug was in Austin performing at Billboard's SXSW concert series.

Young Thug is a cool rapper with a slim body type. He stands at a height of 6 feet and 3 inches and weighs around 76 kg. He has black eyes with black hair. His body measurement is 38-13-30 inches (chest-arm-waist). He has inked various parts of bodies including the chest, stomach, arms, hands, and forehead. He has septum piercing and he has got a unique vocal style. He is speculated to be wearing a shoe of size 9 (US).

Trivias About Young Thug You Need To Know.