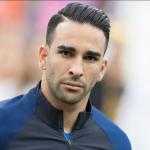 One of the popular professional Football Player is named as Adil Rami who plays for French club Marseille and the France National Team. He is well known French footballer. He is a defender and plays in the center back position. He had played for Frejus, Lille, Valencia, Milan, Sevilla, Marseille club. He is right foot player. His Shirt number is 23. Giroud is one of his best teammates. He had represented himself in Russia for the World Cup 2018 as a part of the France team by showing his talent to all. In fact, Rami is an important footballer in the team France.

The 32-years old French football star Adil Rami has finally parted ways with a Canadian American actress and model, Pamela Anderson. Following three marriage failures in her life, the 51-year-old actress and the footballer stayed in a relationship for over a year. Adil Rami has recently won the 2018 FIFA World Cup with his France national team.

Who is Canadian American actress and model, Pamela Anderson?

Passionate and enthusiastic player, Adil Rami was born on 27th December 1985. He was born and raised in Bastia, a city of France. He was born to Moroccan parents. His nationality is French. His astrological sign is Capricorn. He belongs to white ethnicity. He grew up his childhood life along with his two sisters and a brother. He began his football career at the age of 9 by playing with Frejus Saint-Raphael. Playing Football was his hobby, too.

At Frejus, he made his team debut for the club during the 2003–04 seasons with the opponent of Championnat de France amateur. The opponent team was from the fourth division of French football. In total, he appeared in four games. In the 2004–05 season, in total, he made his appearance 24 matches.

After the completion of his 2005-06 seasons, he started playing central defense and soon, he was offered a trial by FC Lille and then he took the opportunity. After training with Lille in the time duration of the week, he signed a contract with Frejus receiving an amount of $12,000.

He was named to the Lille’s senior squad by the manager named Claude Puel when there were 2 months left for the 2006-07 Ligue 1 season. He also made his professional debut on 19th May 2007 in a Ligue 1 match which was with Auxerre. Later, he signed his very first professional contract of a three-year deal which was until 2010. Then, he was leveled up to the senior squad on a permanent basis. He was then given the jersey number of 23. Again, after the end of 2007-08 seasons, he extended a 2-year contract with Lille. On 30th July 2009, he made his debut in the first league of UEFA Europa League clubs in 3rd qualifying round match. In total, Adil Rami played 5 seasons for Lille. His appeared in 142 games with the score of 10 goals.
Valencia
Later, On 3rd January 2011, Rami shifter to the Spanish club named as Valencia. He signed with this club in a contract fee of $7.43 million to $12.38 million. Rami made the first goal for his team, Valencia in his debut match facing the club, Racing de Santander with the winning score of 4-3. On 25th September 2013, he was suspended with his contract because he interviewed on Radio Valencia by criticizing his coach, Dukic along with his teammates due to which he was also fined $340,410.

Later, On 16th October 2013, Valencia permitted him to train with Milan and then Rami left Valencia and began training with the Milan, an Italian club.

Rami made his Serie A debut for his club against Atlanta in a 3-0 victory in the date of 6th January 2014. His first goal for the club came against the club, Torino. He entered his first goal for Milan against Cesena, which resulted in a 1-1 draw on the date of 28th September 2014.
Sevilla
After that, on 1st July 2015, he joined Sevilla FC by signing a 4-year deal with a fee of $4.33 million. In total, he played for 2 seasons in which he appeared 49 matches altogether.
Marseille
He joined Ligue 1 club Marseille after Sevilla by signing a 4-year contract with a fee of $7.43 million. He made his club debut against Oostende in “2017-18 UEFA Europa League 3rd qualifying round”.

He made his Ligue 1 debut against Dijon in 3-0 win. Rami has made 22 appearances and scored a goal for his native club.

Adil Rami made his first international debut in a friendly game against the country, Norway on the date 11 August 2010. He also played for Moroccan national team. He was then offered at the competition by a manager named Henri Michel. But he refused the offer of the manager because his main ambition was to play football for the country, France.

Later, on 27th May 2012, Rami scored his first international goal in a friendly match in Stade du Hainaut, Valenciennes, France against the country, Iceland. In total, he had earned 33 caps for his national side. Loic Remy, Anthony Martial, Dimitri Payet and Paul Pogba are his best teammates of his team.

Adil Rami is single. He is not married yet but he is in a relationship with an American icon, Pamela Aderson. The couples were spotted in St. Tropez while they were kissing at La Gioia Restaurant. Before this, he was in a relationship with an ex-lingerie model named as Sidonie Biemont. Also, they had twins together. Now, his current relationship is going better. They seem to be very happy with each other. The couple makes public appearances together often.

Talking about his body, his height is 1.90 m. His weight is of 88 Kg. His eye color is Dark Brown and hair color is Black. He has a balanced body with good health.

The net worth of Adil Rami is $9.90 million with all of his properties and incomes. He is receiving an annual salary of €6.30 million from his present club. Rami’s current market value is $6.32 million. In Spain, he owns a luxurious house.