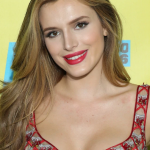 Annabella Avery Thorne is an American actress and singer. She is popular by the name Bella Thorne. She was introduced into the glamour world as a child model. She rose to prominence for her role as CeCe Jones on the Disney Channel series Shake It Up. She is the recipient of numerous Young Artists Awards and appeared in several films such as Assassination Nation, Midnight Sun, You Get Me, Amityville: The Awakening, The Babysitter The DUFF, Alvin, and the Chipmunks: The Road Chip, and Blended. She has also landed lead roles in television series such as My Own Worst Enemy, Little Monk, Big Love, Shake It Up, and Famous in Love. She is also working on her debut album titled What Do You See Now? which is scheduled to release in late 2018.

Bella Thorne had shared a sexy video on her Instagram account, where she stripped off to promote her new cosmetics line titled Thorne By Bella. The Shake Ip Up Star rolls around in whipped cream and drenches herself in chocolate to promote a lip stain, Sexual Chocolate. She shared the video on her Instagram captioned, SEXUAL CHOCOLATE. It is also a promotional video to her upcoming song, "I'm a Hoe 2". According to her, she created and directed the video. Since the video release, her beauty and creativity have been hailed by her fans.

Bella Thorn was born as Annabella Avery Thorne to Tamara Thorne and Delancey Reinaldo "Rey" Thorne. She was born on 8 October 1997. Her birthplace is Pembroke Pines, Florida in the United States. She has 3 siblings, Dani Thorne, Remy Thorne, and Kaili Thorne. Her father died in 2007 in a road accident. Thorne and her siblings were raised by a single mother. Thorne's mother had to raise four children as a single mother. Thus, Thorne started working as a child actor to support the family.

Thorne was bullied a lot at the school since childhood age because she was dyslexic. Thus, she was home-schooled and attended Sylvan Learning Center to overcome her difficulties. She holds American nationality and belongs to Cuban, Italian, and Irish ancestry. Her birth sign is Libra. Spanish is her native language.

Thorne started her career as a child model and has appeared in several uncredited roles in the films. She appeared as a sidelines fan in the 2003 film Stuck on You at the age of 6. Since then, she started appearing in small roles in films and television projects.

Thorne's first major television role landed in the second season of Dirty Sexy Money in 2007. She joined the recurring cast where she played Margaux Darling. The following year, she starred as Ruthy Spivey in the short-lived drama series My Own Worst Enemy. She was awarded the Young Artist's Award for her role. She rose to prominence after she was cast as one of the lead roles in the Disney Channel sitcom Shake It Up. It co-starred Thorne and Zendaya. She played the role of a dancer with heavy ambitions for a career in the spotlight despite having dyslexia, CeCe Jones. She has also appeared in other television series including October Road Little Monk, In the Motherhood, Mental, Big Love, Wizard of Waverly Place, Good Luck Charlie, Red Band Society, Scream, and K.C. Undercover. She also landed a lead role in the 2017 television series Famous in Love, where she appeared as Paige Townsen.

She is an enthusiast philanthropist. She supports the Humane Society, the Cystic Fibrosis Foundation, and The Nomad Organization. It provides education, food, and medical supplies to children in Africa. She is also a pet lover and has 2 dogs, six cats, and a turtle.

Net Worth of Bella Thorne

Bella Thornes earns a large fortune through acting. She also earns via singing and modeling. It can be assumed that this excellent actress makes good money from her work. As of 2018, the net worth of Bella Thorne is estimated at around $5 million.

Trivias About Bella Thorne You Need To Know.