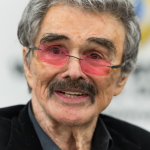 Burt Reynolds left this world in 6th September 2018 in Jupiter, Florida, the U.S due to Cardiac Arrest. He had been suffering from heart problems for a number of years.

Burt Reynolds, "Smokey and the Bandit" star, dead at 82.

Burt Reynolds was born on 11th February 1936 in Lansing, Michigan, the U.S. His nationality is American. He was the son of Fern and Burton Milo Reynolds.

Net Worth of Burt

The net worth of Reynolds is estimated to have $5 Million as of 2018.

Trivias About Burt reynolds You Need To Know.