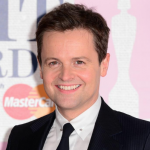 Most people may be known as a TV personality but Declan Donnelly is gradually gaining recognition as an actor as well as a producer. Going down memory lane, Declan is said to have started his career when he auditioned for the children's TV drama Byker Grove along with his longtime friend and partner, Anthony MCPartlin and over the years he has hosted several TV shows and appeared in numerous movies with various awards and nominations to credit. The British talented entertainer is indeed a prototype on the industry and someone whom youngsters would love to emulate. Let's know more about him through this article.

Declan Donnelly is an English TV presenter, producer, and actor, mostly known as working alongside Anthony McPartlin in presenting the comedy show duo Ant and Dec and  Ant & Dec’s Saturday Night Takeaway. Furthermore, he has been a successful TV presenter on various TV shows like Byker Grove, SMTV Live, Britain’s Got Talent and Poker Face.

Who is Ant McPartlin?

Who are the parents of Declan Donnelly?

Recalling his early life, Declan Donnelly was born in Newcastle-upon-Tyne, England, the UK. He was born to Irish parents, Alphonsus and Anne Donnelly and is among the seven children. They are three sisters: Patricia, Moyra and Camelia and three brothers: Martin, Eamonn, and Dermott. He holds both the British nationality and of Irish ethnicity.

Concerning his education, He first enrolled at St Michael’s Roman Catholic Primary School and later received 8 GCSEs from St Cuthbert’s High School. Furthermore, there is no such information regarding his college or university he has attended.

When did Declan Donnelly begin to start acting?

Is Declan Donnelly married or not?

Reflecting on his personal life, Declan has been married to Ali Astall who is his and Partlin manager. He dated her for a year and engaged on 13 November 2014. Finally, he tied the knot with her on August 1, 2015. He has recently become the father of a daughter on September 1, 2018.

What is the net worth of Declan Donnelly?

As an actor and TV presenter, Declan earns a decent amount of money and fame in the field of the entertainment industry. As per online sites, his estimated net worth said to be $4 million and his salary is yet to be disclosed.

How tall is Declan Donnelly?

Observing his body statistics, Declan stands a height of 5 feet 6 inches and weighs around 75 Kg. He has brown eyes and light brown hair color. His other body information is yet to be disclosed. In the case of disclosed, we will let you know.