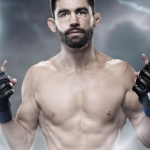 Dominick Cruz is a professional mixed martial artist from the USA. He is currently signed to the Ultimate Fighting Championship (UFC). He is considered one of the greatest mixed martial artists of all time. In addition, he is a former two-time UFC Bantamweight Champion and was also the final bantamweight titleholder of World Extreme Cagefighting (WEC). He is known as one of the most agile fighters in MMA and he is noted for his quick footwork, head movement, and use of feints. He often attacks with combinations, step-in jabs, and single strikes thrown from all angles. He is nicknamed The Dominator. On January 29, 2005, he made his MMA debut in Rage in the Cage 67 event in Phoenix, Arizona, United States, against Eddie Castro winning the match in a Decision (split) 1–0. Regarding his mixed martial arts record, he has fought for 28 matches out of which he won 24 matches and lost 4. As of May 2, 2022, he is #8 in the UFC bantamweight rankings.

Marlon Vera knocked out bantamweight legend Dominick Cruz. He is also the first fighter to knock Cruz out cold, which he did in the fourth round with a nasty head kick right to the face of the former UFC and WEC bantamweight champion. This marks a career high point for Vera, who entered Saturday’s main event as the No. 7 bantamweight in MMA Fighting’s Global Rankings. He has now won four straight fights and seems poised to challenge for UFC gold in the near future.

What is Dominick Cruz Famous For?

What is Dominick Cruz's Real Name?

Dominick Cruz took birth with the real name of Dominick Rojelio Cruz on 3rd September 1985. He is from San Diego, California, United States. He holds American nationality and his ethnicity is Mixed (American-Mexican). His present age is 37 as of 2022. He lived with his single mother, grandmother, and brother in a trailer park in Tucson for most of his childhood. He faced his father’s drug addiction from his very early days and saw his mother suffer a lot of financial troubles to raise her kids properly. His father was absent for most of his childhood, after separating from his mother and he was raised by two women, for the most part, his grandmother and mother. He is very close to his mother. He started wrestling in seventh grade and competed all through high school out of Flowing Wells High School. Due to injury, he lost the opportunity of receiving a scholarship to wrestle at the University of Northern Colorado. He worked as a customer service representative at Lowe's and was studying to be a firefighter at community college before becoming a full-time fighter.

Fight of the Night (One time) vs. Joseph Benavidez

Who is Dominick Cruz Girlfriend?

Dominick is a secretive man when it comes to his personal life but sources claim that he was in a long-term relationship with Kenda Perez. However, the relationship was not confirmed. He was again rumored to have dated model Amanda Nicole, although nothing was confirmed. He is enjoying his present life a lot as well as he is focusing on his career. His sexual orientaiton is straight and he is not gay.

How much is Dominick Cruz's Net Worth?

Dominick Cruz is a Mixed Martial Artist (MMA) whose net worht is estimated to have $3 Million as of 2022. He has made most of his net worth from his MMA career and UFC analyst job. Till 2022, Dominick Cruz has career earnings of $2,263,000. He is one of the nicely paid UFC athletes with an average salary of $350,000, He also earns other perks like performance bonuses and sponsorship. He has either promoted or endorsed brands like Louis Vuitton, Memphis Car Audio, Specialized Costa Mesa, Monster Energy, FS1, TOYO TIRES, Polaris RZR, Premium Auto Styling, Hayabusa Combat, and more. His highest payout was when he fought Cody Garbrandt at UFC 207, He was paid $440,000 in total, including his base salary of $350,000, Fight of the Night bonus of $50,000, and Reebok sponsorship of $40,000. He is living a lavish lifestyle at present.

How tall is Dominick Cruz?

Dominick Cruz is a handsome man with a standing height of 5 ft 8 in. His body weight is 61 KG. His hair color is black and his eye color is dark brown. His body type is athletic. His highest reach is 68 in (173 cm).