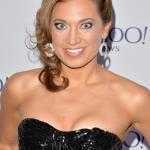 An amazing and a glamorous diva of American television world, Ginger Renee Colonomos professionally known as “Ginger Zee” is an illustrious American TV persona. Ginger Zee is the chief meteorologist for ABC News and is best recognized for her work experience as a meteorologist for the television shows like ‘Good Morning America’ and ‘ABC World News Tonight’.

A charming face of American television glare, Ginger Zee puts her first step into this world on 13th January 1981 in Orange, California, United States of America. Ginger holds an American nationality as she was born to American parents ‘Robert O. “Bob” Zuidgeest’ and ‘Dawn E. HemlebZuidgeest-Craft’. She belongs to the white ethnical background and has three siblings; a brother Sean Jeffrey Zuidgeest and two sisters Adrianna Craft and Elaina Craft. Regarding her education, Ginger completed her high school education from ‘Rockford High School’ in the year 1999. After high school, she joined Valparaiso University from where she completed a Bachelor degree majoring in meteorology.

About her personal life, the gorgeous television personality Ginger Zee is a married woman. She tied the knot in a marital relationship with WNBC television personality, Ben Aaron on 7th June 2014. The couple dated for several years and finally got engaged on August 2013. After a year of marriage on 29th June 2015, Ginger announced on her show that she is expecting her first child. On 19th December 2015, she delivered a baby boy and named him Adrian Benjamin. It is going to be almost two years of their marriage and still there is no news published about them getting separated or divorced. It seems that Ginger Zee is having a luxurious and blissful moment with her family at the present time.

This 37 years aged renowned television personality, Ginger Zee is also focused alot for her hot and exquisite figure. She looks amazingly stunning and mesmerizing in her each and every television appearances. As of 2018, the gorgeous television personality Ginger Zee carries a seductive body measuring 34-25-34 inches in size. Her bra cup size is 32B. Ginger loves posting many photoes on bikini dresses where she has flaunted her bold and hot pair of legs. Many people not only just watch her presentation but also wait for her shows to have a glance of her beautiful and attractive figure. This stunning television figure, Ginger Zee stands tall with the height of 5 feet 7 inches and carries an average weight of 56 kg.

Soon after completing graduation from college, Ginger Zee started working in the various media networks. In the year 2004, she became affiliated with different television stations like ‘WEYI-TV’ based in Flint, Michigan and WLAV-FM and WOOD-TV both in Grand Rapids, Michigan. She also worked as an intern under James Spann, chief meteorologist at WBMA-LD ABC 33/40 in Birmingham Alabama and ‘WYIN-TV’ based in Merrillville, Indiana. In 2006, she started working for WMAQ, Chicago, Illinois, where she worked as a meteorologist.

While working in the show, she was offered to make a guest appearance in a weekend edition show ‘The Today Show’. And Ginger gained much needed recognition in 2011 when she started working for the show called ‘Good Morning America Weekend’. The show earned her a lot of appreciation and fame. In addition to that show, she also appears in other television shows like ‘Nightline’ and ‘ABC World News Tonight’ occasionally. In 2013, Ginger Zee got promoted to a chief meteorologist in ABC News show ‘Good Morning America’.

Besides meteorology, Zee also appeared on ABC's Dancing with the Stars show as a celebrity competitor paired with Professional dancer Valentin Chmerkovskiy. At the end, the duo finished third in the competition.

Salary and Net Worth

At present, the proclaimed television personality Ginger Zee has earned an estimated net worth amount of $3 million dollars. Ginger is earning an estimated salary amount of $500 thousand dollars annually at present.

Ginger Zee has certainly been appreciated in many occasions for her work performances at various television networks. She has proved to be one of the favourite broadcast meteorologists in America. More news and information about her can be gathered from her twitter account @Ginger_Zee.