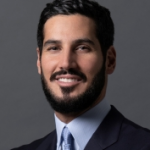 “If you can dream it, you can achieve it”. Today’s topic is about the famous Deputy President and Vice Chairman of Abdul Latif Jameel Domestic in Saudi Arabia, Hassan Jameel. Moreover, he got immense popularity after dating the well-known singer Rihanna. Furthermore, he works in Abdul Latif Jameel Company Ltd, the eponymous company founded by his grandfather. Similarly, the company is now active in 30 countries with a focus on the Middle East, North Africa, and Turkey region.

What is Hassan Jameel known for?

Who are the parents of Hassan Jameel?

Back to his early life, Hassan Mohammed Abdul Latif Jameel a.k.a Hassan Jameel was born in Saudi Arab under the birth sign Libra. As per his nationality, he is Saudi Arabian and belongs to Arabian ethnicity. Moreover, he comes from the Muslim religion. Similarly, he is the son of Mohammed Abdul Latif, who currently serves as the chairman and president of their family business.

Furthermore, he holds a Bachelor of Arts in International Economics from Sophia University in Tokyo, Japan. Jameel completed his MBA from London Business School hence, he is fluent in English, Arabic, and Japanese.

What is the profession of Hassan Jameel?

Talking about his profession, Jameel works for the domestic operations of Abdul Latif Jameel as he is responsible for operations such as automotive, land, real estate and machinery. Moreover, he also involved in a number of humanitarian initiatives including programs with UN High Commissioner for Refugees.

To whom Hassan Jameel was married?

The billionaire Jameel has been married to the art expert Lina Lazaar. The couple tied a knot on 2012 at Paris Opera House after dating several years. However, their relationship didn’t last long and chose to separate after some years. After divorce with Lina, Jameel started dating Rihanna in 2017. Perhaps, Rihanna kept her relationship away from the media.

The duo doesn’t really share their pictures on social media. However, they can be seen together in their fan pages. However, as shown above, there was a rumor that Rihana got pregnant with Hassan. But then there are no proofs supporting the rumor hence it is proved to be false.

Well, the couple is spotted together in different places and spends quality time together. Moreover, both the pair are happily together without having any rumors of a separation.

Who has Hassan Jameel dated before?

Mr. Jameel is perhaps best known for another high-profile celebrity relationship. He was seen canoodling with British model and actress Naomi Campbell in 2016.

Ms. Campbell and the “Umbrella” songstress have a history of drama, with the pair famously unfollowing each other on Instagram last year.

But, Ms. Campbell told an interviewer that she has no “beef” with Rihanna or anyone, “especially with black women, who are in the same thing and doing the same struggle”.

How much net worth is Hassan Jameel owns?

As being a son of billionaire parents, Jameel is enjoying a lavish lifestyle. Similarly, he is vice chairman of his family’s business, Abdul Latif Jameel one of the biggest investors in Toyota.

Overall, he is Known as one of the richest men in the world with an estimated $1.9 billion net worth. Moreover, he earns $202 million as his annual income.

Moreover, he resides in Saudi Arabia where the estimated value of his Real Estate property is around $25.8 million. Well, Jameel owns a number of cars including Ford, Range Rover ($90,000), Ferrari, and Bentley ($20000).

How tall is Hassan Jameel?

Observing his body statistics, Jameel stands a heigh of 6 feet 0 inches and weighs around 72 Kg. Similarly, He has a pair of black eyes and black hair color. Further, his body measures 39-34-37 inches. His shoe size is 8.