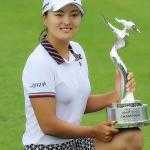 Ko Jin-Young also was known as Jin Young Ko is a South Korean professional golfer. She turned professional in 2013 and currently plays on the LPGA Tour. She was named the LPGA Rookie of the Year in 2018. She has already won 10 times on the LPGA of Korea Tour by the age of 22. She won her first LPGA major championship, the ANA Inspiration in April 2019. She is ranked at No. 5 in the Women's World Golf Rankings as of April 2019.

What is Ko Jin Young Famous For?

Where was Ko Jin Young Born?

Ko Jin Young was born on 7 July 1995. She was born to a father, Ko Sung-Tae, and a mother, Kim Mi-young. Her ethnicity is Asian (South Korean). Her birth place is in Seoul, South Korea. She holds South Korean nationality. Her zodiac sign is Cancer. Information about siblings, early life, and education is currently unavailable. It will be updated soon.

She has 14 professional wins.

She has won 4 LPGA Tour.

She has won 10 LPGA of Korea Tour.

She finished 2nd at the 2015 Ricoh Women's British Open.

She won the LPGA KEB Hana Bank Championship in 2017.

She became a member of the LPGA Tour for the 2018 season.

She became the only second player in LPGA history to win in her first tournament as a Tour member.

She was ranked at No. 10 in the Women's World Golf Rankings after the end of 2018 season.

She won Bank of Hope Founders Cup in March 2019.

She won her first LPGA major championship, the ANA Inspiration in April 2019. She defeated fellow Korean Lee Mi-Hyang by 3 strokes.

Who is Ko Jin Young Dating?

There is no official information regarding her relationship status. She is not married yet. She might or might not be dating someone. No rumors regarding her affairs have surfaced yet.

Ko Jin Young stands at a height of 1.69 m i.e. 5 feet and 6 and a half inches tall. She has an athletic body build. Her other body measurements are currently unavailable.

What is Ko Jin Young's Net Worth?

Ko Jin Young plays professional golf. As of golfer, she has won estimated $5 million prize money on her LPGA Tour. She earns from her salary, prize money, and endorsements (if any). As of 2019, her net worth is under evaluation. It will be updated soon.