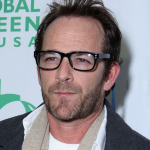 American actor, Luke Perry is popularly known for his role as Dylan McKay in the TV series, Beverly Hills, 90210 from 1990 to 1995 and again from 1998 to 2000. He is also well known for his role as Fred Andres in The CW’s teen drama series, Riverdale. At the initial phase of his career, he gave 215 auditions before finally landing a TV commercial.

Perry, who rose to fame in the 1990s for his role on the hit television series Beverly Hills 90210 was hospitalized in California after suffering a “massive” stroke at his home in Sherman Oaks, where he is said to have been able to communicate with the paramedics and was responsive, reports TMZ.

The 52-year-old actor was rushed to a Los Angeles-area hospital where his condition reportedly worsened and he remains under observation, his representative told AFP, declining to elaborate on the actor’s condition. Prior to his stroke Perry was said to be experiencing “bad back problems”, which had to be surgically fixed, according to the actor’s neighbor.

Perry’s last major health scare was in 2015 when precancerous growths were found in his body following a colonoscopy, prompting the actor to speak out about checking for colorectal cancer. Upon discovering the growths, He drastically changed his diet to decrease the risk of developing colorectal cancer.

Luke was born as Coy Luther Perry II. He was born in the Mansfield in the state of Ohio. Although he was born in Mansfield, he grew up in Fredericktown. His father name is Coy Luther Perry Jr. Similarly, his mother name is Ann Bennett. His father worked as a steelworker and his mother was simply a homemaker. As he likes to keep his personal life a secret, he hasn’t shared any information about his childhood. Also, there are no details to follow about his early life. His nationality is American and he has a mixed ethnicity of English and Irish.

As per his education or academic achievement, he joined Fredericktown High School. Later, he graduated from there. Afterward, he thought of acting which forced him to move to Los Angeles, California.

Career and Achievements of Luke Perry

Luke has been married in the past. But as of now, he is supposed to be single. Discussing his now-divorced-marriage, he was tied in a marital knot to Minnie Sharp. They got married in 1993. During their time together, they had two children together. Their first child was born on 15th June 1997 named Jack. Similarly, their second child is a daughter named, Sophie born on June 21, 2000. But even after a long time being together, things started falling apart between them. And finally, in 2003, they separated legally.

Before this marriage, he was in a relationship with several other beautiful ladies. He dated Kristy Swanson from 1991 to 1992. Also, he had an affair with the actress, Yasmine Bleeth from 1987 to 1988.

Net Worth of Luke Perry

The net worth of this famous actor, Luke Perry is estimated at around $10 million. He is making an impressive net worth from his work. His present salary has not been revealed yet but it will be updated very soon.

Luke has a charismatic personality. He has an average height of 5 feet 10 inches. He has a balanced weight of 75 Kg. His hair color is Dark Brown and eye color is Light Brown. His other body measurement will be updated soon.

Trivias About Luke Perry You Need To Know.