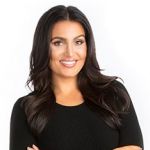 One of the famous American Sports anchor and moderator is Molly Qerim. She is a moderator for ESPN’s First Take.

Molly Qerim was born on 31 March 1985 at New Haven, Connecticut. Her father is Muslim and mother is Catholic.  She holds American Nationality and mixed ethnicity from Middle Eastern (Arabian) and Mediterranean descent. She graduated from the University of Connecticut. She received a master’s degree from Quinnipiac University and her subject was broadcast journalism.

Molly Qerim’s height is 1.67 m and weight is 63 kg. She has the balanced and healthy body.

Molly Qerim’s career started as the anchor and reporter for CBS Sports Network. For the network, she covered college football, National Signing Day, the NCAA Tournament and the U.S. Open. She also hosted SEC Tailgate Show, SEC Tonight, Max Preps Learning Report, Fullcourt Press and Bracket Breakdown as a studio anchor. She also had hosted the annual World MMA Awards several times. She hosted on ESPN and ESPN2 for College Football Live on 2008. She was also honored as Emmy for her contribution. She has been the part of the digital media content part. She became the interim host of ESPN2’s First Take in July 2015. On 15 September 2015, she was promoted to permanent host of First Take.

Molly Qerim’s is a married woman. She is married to Jalen Rose who is ESPN co-worker in July 2018.

Molly Qerim’s net worth is estimated to be $3 Million. Her salary is around $50000. Her source of earning is anchoring as she is the successful sports anchor.