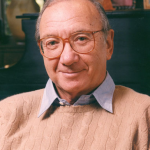 One of the American playwrights, screenwriter and author are Marvin Neil Simon who is famous as Neil Simon. He wrote more than 30 plays. He also wrote a number of movie screenplays.

Neil Simon’s real name is Marvin Neil Simon. He was born on 4 July 1927 at The Bronx, New York. His father name is Irving Simon who was a garment salesman and mother name is Mamie Simon who is a homemaker. He has an elder brother named as Danny Simon. His childhood was difficult. He graduated from high school and soon he signed up with Army Air Force Reserve at New York University. He attended the University of Denver.

Simon’s height is 1.85 m. he had a balanced and healthy body.

Simon’s net worth is estimated at $10 million.

In 2004, Simon received a kidney transplant from his long-time friend and publicist named Bill Evans. He died on 26 August 2018 while he was hospitalized for renal failure. The cause of his death was complications with pneumonia. In New York City, he died at New York-Presbyterian Hospital at the age of 91.