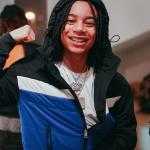 Nicholas Simmons, popularly known by the name YBN Nahmir is an American rapper and songwriter. He founded the YBN collective with YBN Almighty Jay and YBN Cordae. His is famous for his hit singles, "Rubbin Off the Paint" and "Bounce Out With That".

YBN Nahmir was born on 18 December 1999. His birthname is Birmingham, Alabama in the United States. Information regarding his parents is currently unavailable. He is of multiracial African-American descent. He holds American nationality. His zodiac sign is Sagittarius. He follows Christianity religion. He grew up with his mother, cousin, brother, and grandfather. While growing, his life was influenced by his older brothers and cousins involvement in criminal activities. He started showing interests in music when he was fourteen years old. Thus, he got an Xbox 360 as a Christmas gift. He then started playing Rock Band video game. He later used it to record his first song. After playing Rock Band, he played Grand Theft Auto V and also started recording gameplay videos where he would generate a following on YouTube. He would freestyle in Xbox Live parties and alongside numerous other friends, established the Young Boss Niggas collective.

When he was 15-years old, he uploaded his first song, "Hood Mentality" with fellow YBN member, YBN Almighty Jay on YouTube in March 2015.

He then uploaded several of his songs on YouTube.

He released his first mixtape titled Belief in The Glo on Soundcloud on 2 January 2017.

He released his second mixtape on 21 January 2017.

He released "Rubbin Off the Paint" to WorldStarHipHop's YouTube channel on 18 September 2017. The song went on becoming his breakthrough song.

Following the success of "Rubbin Off the Paint," he pulled out of school and started online classes.

In November 2017, he was dragged into controversy after a record label claimed his song. His manager sold the instrumental for the song to a third-party.

His other 2017 releases failed to hit the chart.

He released "Bounce Out With That" on Lyrical Lemonade's YouTube channel on 23 January 2018, which earned over 128 million views on YouTube.

He signed with Atlantic Records in April 2018.

In June 2018, he was named as one of the members of XXL's "2018 Freshman Class". He competed in a cipher with Steffan Don and Wifisfuneral.

In Juley 2018, he announced via Twitter that he will tour in Europe in fall 2018 with YBN Almighty Jay and YBN Cordae. They visited France, Germany, Poland, Sweden, and other European countries.

The young aspiring rapper from Alabama is unmarried. However, he is reportedly dating model and social media star, Alycia Tyre. No rumors regarding his secret affair have surfaced yet. He is 19-years old and more focused on his music career.